Mann of the Church 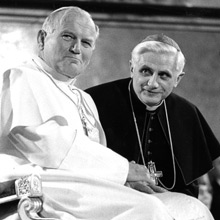 “It gradually became clear to me that what God was planning for me had to do with the priesthood,” Joseph Ratzinger says looking back. His roots in the family and Church and his experience of the inhuman ideology of National Socialism strengthen the young Joseph Ratzinger on his path to becoming a priest. It is the start of an impressive religious career. 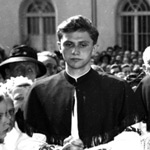 The allure of National Socialism cannot touch Joseph Ratzinger. He sees through the tyranny and knows his own goal: he wants to become a Catholic priest. Together with 120 seminarists he enters the priests´ seminary in Freising and studies philosophy at the local college. In 1947 are added studies in theology at Munich University. On 29th June 1951 he is ordained as priest along with his brother Georg and a further 42 candidates by Cardinal Michael von Faulhaber. On 8th July he celebrates his first Mass together with his brother in Traunstein. After working for a short time as assistant priest in Moosach there follows a year´s pastoral care in Bogenhausen, a district of Munich. His workload is enormous: religious lessons in six different classes, two different sermons every Sunday. He has intensive contact to young people and countless meetings with people: in the confessional, at the sickbed, at christenings and funerals. In 1952 the young chaplain is appointed lecturer at the priests´ seminary in Freising. He holds lectures on sacramental care. In 1953 Joseph Ratzinger becomes a doctor of theology. His academic career takes its course. His Habilitation, postdoctoral lecturer qualification, in 1957 is followed by work as professor in Freising and finally as professorial chair in Bonn, Münster, Tübingen and ultimately Regensburg. 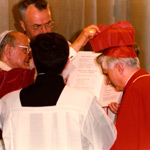 In 1977, Professor of Theology, Joseph Ratzinger, is torn out of his fruitful teaching and research work. He is appointed Archbishop of Munich and Freising. Only after thorough consideration does he take on the office of bishop. For his episcopal motto he chooses a term from the Third Epistle of John: cooperatores veritatis, fellow-workers of the truth – a term noticeably in the plural, as Ratzinger likes to emphasise. On 28th May he is ordained bishop in the Liebfrauendom in Munich. Only four weeks later he is appointed cardinal by Pope Paul VI. In his function as Archbishop, Cardinal Joseph Ratzinger feels obliged to criticize modern times and social conditions. but at the same time maintain the process of dialogue. For Cardinal Joseph Ratzinger his time as archbishop was not to be of any great length. On 25th November 1981 Pope John Paul II appoints him Prefect of the Catholic Congregation of the Faith – one of the highest offices known in the Catholic Church. On 15th February 1982 Cardinal Ratzinger relinquishes his office as Archbishop of Munich; on 28th February he marks his farewell with a Pontifical Mass, a prayer at the Marian Column and a ceremonial event in the Hercules Hall at the Munich Residenz.

Perfect of the Congretation for the Doctrine of the Faith

As Prefect of the Congregation for the Doctrine of the Faith Cardinal Ratzinger has the duty to promote and safeguard the doctrine on the faith and morals throughout the Catholic Church. From the beginning he holds a multitude of offices. He is President of the Pontifical Bible Commission and of the International Theological Commission as well. From 1986 to 1992 he heads in addition the Preparatory Commission for the Catechism of the Catholic Church. In 1998 Cardinal Ratzinger becomes Vice-Deacon and finally in 2002 Deacon of the College of Cardinals. In this function he conducts the funeral ceremony following the death of John Paul II and presides over the conclave from which he himself is chosen as Pope on 19th April 2005.