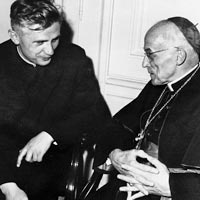 “Teaching, the handing on of knowledge, was something that from very early on inspired me and writing as well,” says Joseph Ratzinger. The meeting with Cardinal Joseph Frings in 1961 is decisive for his path in life. Joseph Ratzinger becomes the cardinal’s adviser, accompanies him to the Second Vatican Council (1962–1965) and is appointed official council theologian.

The academic career of Joseph Ratzinger begins with his Promotion, a postdoctorate, under Professor Gottlieb Söhnen in July 1953. The dissertation theme is The People and the House of God in Augustine's Doctrine of the Church and is awarded the highest mark. From 1953 on Joseph Ratzinger concentrates on the thesis for his Habilitation, postdoctoral lecturer qualification, which at the first attempt is not accepted. Against the objections of the professor of dogmatic theology, Michael Schmaus, who sees dangerous modernist tendencies in the work, Ratzinger qualifies in 1957 in fundamental theology with the subject The Theology of History in St Bonaventura. In 1958 the 31-year-old is appointed professor of dogma and fundamental theology at the Philosophical and Theological College in Freising. In 1959 Joseph Ratzinger is called to take the chair of fundamental theology at Bonn. In his opening lecture he focuses on the question of the relationship between faith and reason – a theme that will stay with him. In 1963 he is called to the department of dogmatic theology and the history of dogma at the University of Münster In 1966 on the recommendation of Hans Küng, Ratzinger is appointed to the chair for Catholic dogmatic theology at the Catholic theological faculty at the University of Tübingen. Directly affected by the student protests of ’68 he accepts as a consequence of the strain, the call to the University of Regensburg in 1969. There he teaches dogmatic theology and the history of dogma until 1977 when he is appointed Archbishop of Munich and Freising. After his election to Pope in 2005 he continues to be an honorary professor at Regensburg.

On 25th January 1959 Pope John XXIII announces his intention to call an ecumenical council of the Church. The aims were to be the renewal of the Church, greater clarity in thinking and strengthening the bonds of unity. A cycle of lectures was organised in Genoa as preparation for the council at which also Cardinal Joseph Frings was to talk. The Archbishop of Cologne however does not feel capable of fundamentally discussing the theme assigned to him The Council and Modern Thought, and turns to the mere 34-year-old theologian Ratzinger. In his memoirs Frings recounts: “I met Professor Joseph Ratzinger at a Gürzenich concert… I asked him if he would like to help me prepare for this theme and the topic seemed to appeal to him. He soon provided me with an outline which I found so good that I needed only to make one correction.” Cardinal Frings, summoned to an audience with Pope John XXIII because of the speech in Genoa, discovered that contrary to his expectations, the Pope was delighted with the ‘wonderful speech’: “Dear Cardinale, you said everything I have been thinking and wanting to say but could not say myself.” When it was mentioned that the lecture was not in fact from him but from Professor Ratzinger, the Pope answered that he as well has to have texts written for him. It is all a question of finding the right adviser. The audience with Pope John XXIII encouraged Cardinal Frings to bring in Joseph Ratzinger as theological adviser for the coming work in the central commission on the dogmatic texts.

The Way to the Council

After the announcement of the Second Vatican Council by Pope John XXIII, a sense of movement and hope arises. Cardinal Joseph Frings belongs to the ten-man central commission. He regularly receives from the papal commission preparing for the council the so-called schemata – drafts in Latin - which would later be presented for consultation and approval. Cardinal Frings regularly forwards these drafts on to Joseph Ratzinger with the request for criticism and proposals for improvement. Ratzinger has much to criticise and amend. He considers scholastic theology with its inflexible and narrow forms no longer a suitable instrument for the new language and openness needed to face up to the present. He painstakingly works through the council schemata adding his handwritten comments. “The time for the Council has come,” writes Joseph Ratzinger. Cardinal Frings takes Ratzinger with him as his theological adviser to Rome.

The Second Vatican Council was opened on 11th October 1962. The 2498 council fathers enter St Peter’s in a long procession. Joseph Ratzinger experiences with enthusiasm the first session of the council which lasts from 13th October to 8th December 1962. Looking back he has said that he as well was influenced by the Pope’s optimism. Towards the end of the first session Joseph Ratzinger is appointed at the recommendation of Cardinal Frings as an official council theologian (peritus). He meets bishops from every continent and according to his own statement feels in a special way the breath of history and the World Church.
He works together with the major council theologians: Yves Congar, Henri de Lubac, Jean Daniélou, Gérard Philips and Karl Rahner. Pope John XXIII dies during the council. Cardinal Montini as his successor Paul VI becomes the actual council pope. Ratzinger’s initial enthusiasm for the council gives way to increasing disillusionment, sometimes he even has the impression “that nothing in the Church is permanent any more, that everything is open to revision.” But Ratzinger remains deeply convinced that the texts of the council stand completely in the continuity of faith. Honest and thorough exegesis “will also truly open up a path with a great future before it.”
The council ends on 8th December 1965 after four sessions.